THE LEGACY BALLROOM is handled by A Catered Experience, a division of Zippy's Restaurants

Your support is vital in promoting and preserving Okinawan culture.

The Hawaii Okinawa Center (HOC) is the home of the Hawaii United Okinawa Association. The HOC is situated on 2.5 acres in the Gentry Waipio Business Park and stands as a living tribute to the Okinawan immigrant pioneers who began arriving in Hawaii in 1900. It was built with donations from Hawaii’s Okinawan and business communities as well as from supporters in Okinawa. The HOC opened in 1990, which marked the 90th anniversary of Okinawan immigration to Hawaii.

The Seed of an Idea
The idea of an Okinawan cultural center and “home” for Hawaii’s very active Uchinanchu community came from then-Okinawa Governor Junji Nishime during a 1980 stop in Hawaii. The HUOA member clubs, supported by Hawaii businesses and supporters in Okinawa, pulled together and raised over $9 million to build the Center.

Ground was broken for the two-building complex in March 1989. Fifteen months later – in June of 1990 – the doors of the HOC officially opened with a grand celebration attended by many Issei, in whose memory the Center was built. Several hundred supporters came from Okinawa, including Governor Nishime, who had sparked the dream.

The Center was designed by Hawaii architect Maurice Yamasato, who incorporated traditional Okinawan motifs in the plans. The Center features two turtle-shaped buildings, which, in Okinawan culture, symbolizes long life. Traditional Okinawan kawara clay tiles – a gift from the people of Okinawa – line the roofs of both buildings. The kawara tile came with an installation crew who spent several weeks laying the clay tiles in place. Topping off the roof are a pair of ceramic shiisaa, or lions, to ward off evil spirits as they do in Okinawa.

The “Ballroom”
The Albert T. and Wallace T. Teruya Pavilion, named for the founders of Times Supermarket Ltd., is a multifunctional auditorium/theater and banquet hall featuring a stage with professional lighting and sound system. The Teruya Pavilion is the setting for many cultural performances, conferences, ceremonies, banquets and receptions. The Teruya Pavillion can accommodate up to 1,200 guests in a theater-style configuration, or 900 guests for a sit-down banquet. The thousands of donors who contributed to the HOC project are recognized on the “Wall of Honor” mounted at the pavilion’s entrance.

Two large ceramic shiisaa, a gift to Hawaii’s Uchinanchu community from Okinawan ceramicist Isamu Nakamura, guard the entrance to the Teruya Pavilion. During a trip to the islands, Mr. Nakamura collected soil from various parts of Hawaii and mixed it with clay from Okinawa, creating a special clay symbolic of the ties between Hawaii and Okinawa.

The Higa Building
The Yeiko and Kameko Higa Building – named in memory of the Issei parents of Zippy’s restaurants founders, Charles and Francis Higa – houses the administrative offices of the Hawaii United Okinawa Association on the second floor. A museum for Okinawan artifacts and other historical and cultural materials, book collection, along with a gift shop, are located on the ground floor of the Higa Building.

Two contrasting gardens – the Takakura Okinawa Garden and the Issei Garden – grace the grounds of the HOC. The beautifully landscaped gardens are immaculately maintained by volunteers from the Okinawan community.
The Issei Garden, located on the Uke’e Street side, honors Hawaii’s Okinawan immigrant past with a bronze statue of Kyuzo Toyama, the man referred to as the “Father of Okinawa Immigration,” and an 18-ton memorial boulder – both gifts from the people of Kin Town, Okinawa, where Toyama was born. An impressive marble ground map depicts Toyama’s vision, “Let us set out and let the five continents be our home.” 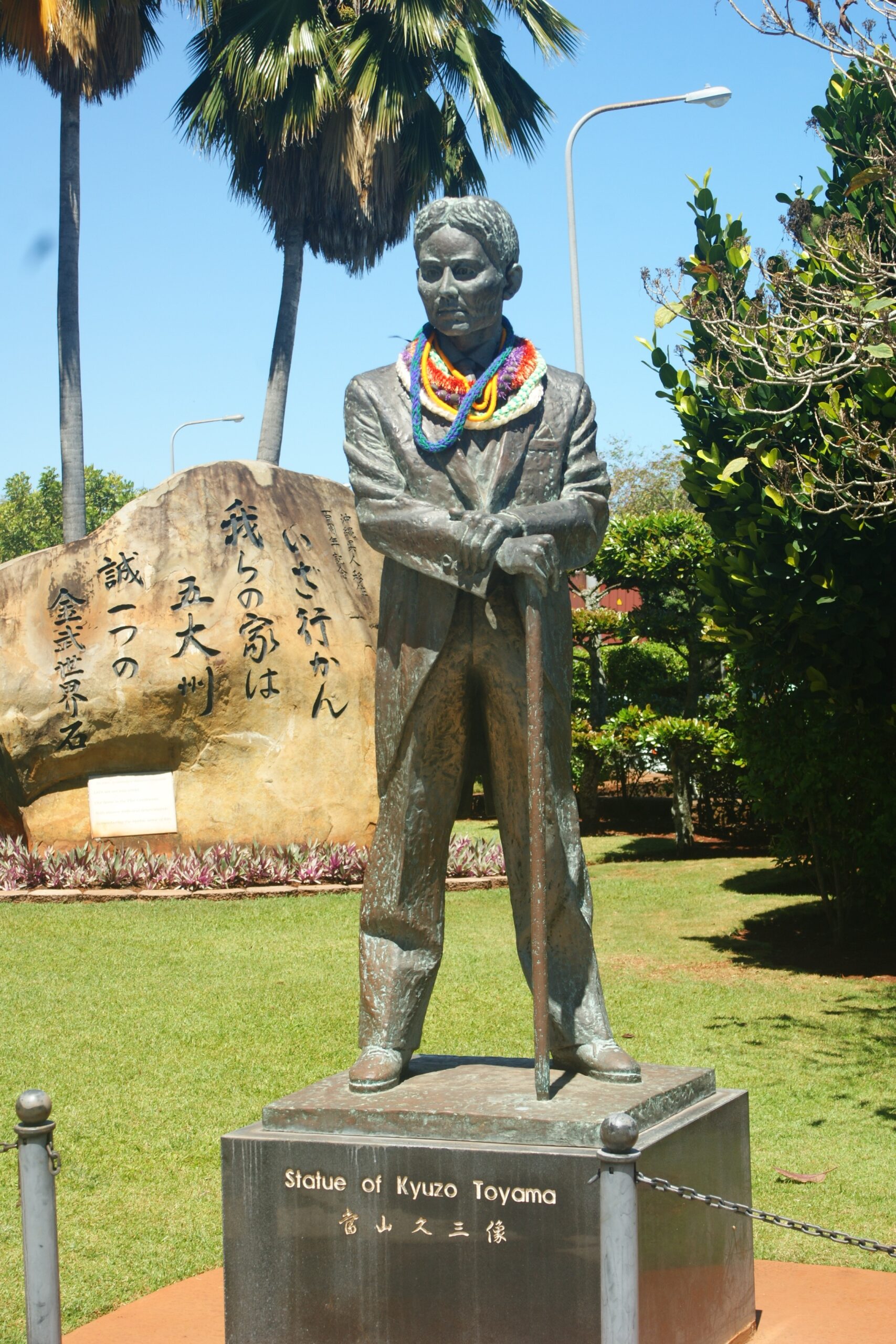 The Takakura Garden celebrates Okinawan culture through its landscaping and design . The garden was a gift from the Takakura Corporation of Okinawa, which also sent a crew of professional landscapers to install the plants and stones in the garden. This garden is the only one of its kind outside of Okinawa and is landscaped with plants native to Okinawa that have been arranged symbolically. The Takakura Okinawa Garden also features a cascading waterfall which flows into a tranquil fishpond and other objects found in Okinawan gardens. The beauty and tranquility of the Takakura Garden has made it a popular setting for weddings and a popular backdrop for professional photographers.